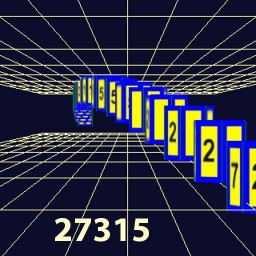 Kinetic visual acuity is the second most important factor for athletes after physical and mental.

The training methods for kinetic and dynamic visual acuity are introduced below.

What is dynamic and kinetic visual acuity?

Dynamic and kinetic visual acuity is the ability to see moving objects.

There is sports vision as a classification method of visual acuity.

According to the Sports Vision Association, sports vision is classified into the following 8 items.
In particular, in baseball hitting, Kinetic and Dynamic visual acuity are most important.

Sight to see what is stationary. (Measured by general visual acuity test)

Visual acuity for an object that moves in the depth direction.

Visual acuity for an object that moves vertically and horizontally.

Ability to move the line of sight quickly and smoothly.

Dynamic and Kinetic visual acuity does not improve just by training the eye muscles. It is necessary to train together with the “brain image processing function”.

However, that does not make the training method more complicated.

All you have to do is create a scene that uses Dynamic or Kinetic visual acuity and repeat the training.

The most popular method of training Dynamic visual acuity is to read the letters written on the outside signs and telephone poles from the train window.

A well-known training method for Kinetic visual acuity is to read the numbers or letters written on the thrown ball.

This method of training is very effective, but it also requires tedious preparations and a pitcher to go out with. It is also difficult to control conditions such as ball speed, rotation speed, and rotation direction.

It is said that you can train more effectively by using shutter glasses. Shutter glasses are glasses with a flash effect that open and close the shutter at a high speed with a liquid crystal. 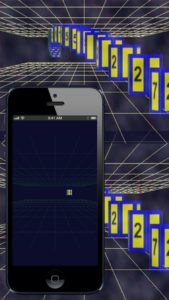 There are Free and Paid versions of “Kinetic Visual Acuity”. 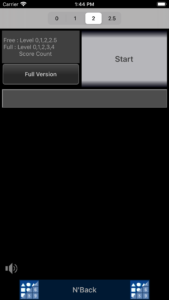 In the paid version “Kinetic Visual Acuity”, you can select “Test mode” or “Training mode”.

Use the selection box (test / train) in the upper left of the startup screen to switch between “test mode” and “training mode”. 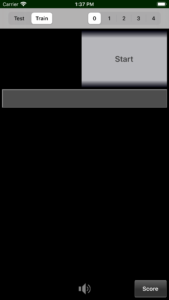 You can practice by switching to “Training Mode” even during the test.

In training mode, you can practice the same level again and again.

It’s easy to use, just select a difficulty level and tap the start button.

The difficulty level is set in the selection box in the upper right. 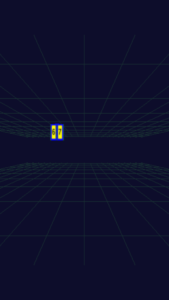 The screen switches by tapping the start button, and a hexagonal pillar will rotate out from the deep inside of the screen.
Scan the number written on the hexagonal pillar.

【About the hexagonal pillar】

The moving speed and rotating speed of the hexagonal pillar are determined by the difficulty level.

The trajectory of the hexagonal pillar changes randomly every time, like baseball pitching. 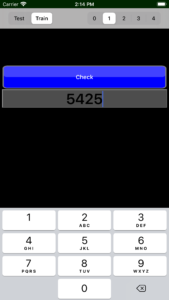 Enter the read numbers and the result will be displayed. 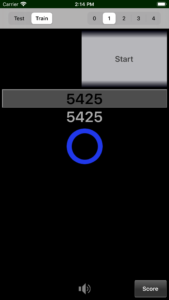 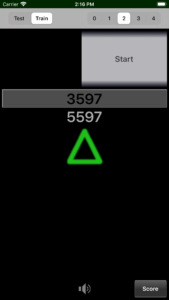 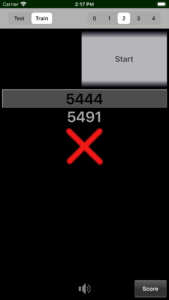 The points that can be added are 4 points for ◯, 2 points for △, 0 points for ☓, and the maximum score is 100 points.

It’s easy to use in test mode, just repeat the test “Tap the start button, read the number on the hexagonal pillar and answer” 25 times. Since it is not a time trial, you can interrupt it on the way.

The difficulty level is set automatically.

The screen switches by tapping the start button, and a hexagonal pillar will rotate out from the deep inside of the screen.
Scan the number written on the hexagonal pillar.
(Same as training mode) 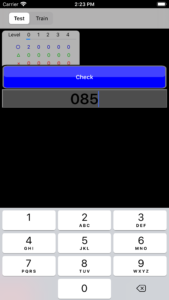 Enter the read numbers and the result will be displayed.
(Same as training mode) 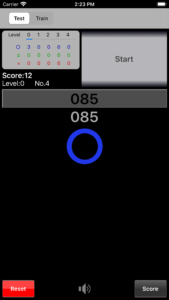 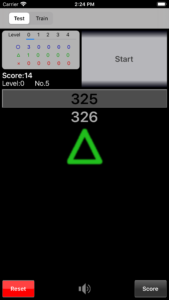 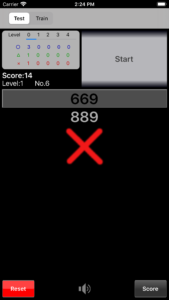 When the test is complete, your score will be recorded.

If you want to cancel the test, you can reset it by tapping the red reset button at the bottom left of the screen.

To check / delete the test score, tap the score button at the bottom right of the screen.

Sound effect on / off

To turn off the sound effect, tap the speaker button at the bottom center of the screen. The sound effect switches on / off each time you tap it.

The usage is basically the same as the iPhone app “Kinetic Visual Acuity”, but the score display is quite easy to understand.

Also, in the iPad version, screen transition from the startup screen to the screen where the hexagonal pillar rotates does not occur. 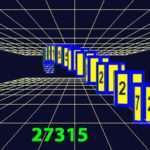 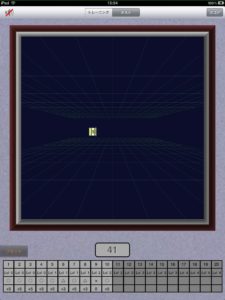 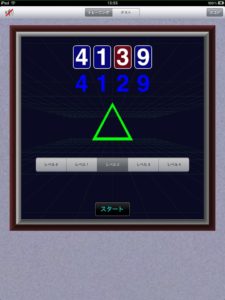